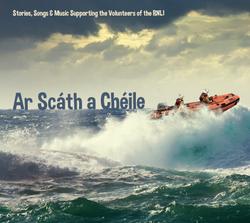 ‘Ar Scáth a Chéile’, a rare recording of stories, songs and music by Joe O’Connor and friends was launched in Cois na hAbhna on Saturday 23rd November at 7pm. Lovers of traditional singing, recitation and storytelling gathered from near and far for what was a very special night with all proceeds going to the RNLI to help fund the Lifeboat service. Joe Queally, a fundraiser for many years for the RNLI, has described this 16 track CD as “a pure gem, a must have for anyone with even a passing interest in poetry and songs”. The launch was performed by Owen McMahon, son of the legendary Listowel writer Dr. Bryan McMahon, whose poetry is reflected in the CD. For many years, Joe O’Connor, has been the driving force behind the very successful Singing Sessions Programme at Fleadh Nua in Ennis, where some of the best known and respected singers from Ireland and Britain have taken part. Joe has a great passion for poetry, and he is in great demand at Fleadh’s, festivals and singing sessions up and down the country. Finally giving in to constant requests over the years from friends far and wide, Joe decided to put this album together, calling on some of his closest friends to help with songs and tunes. Contributions from singers Séamus Brogan, Bridget Delaney, Orla Murphy, Ann Mulqueen and Elle Marie O’Dwyer, and music by Martin Breen and Frank Whelan have complimented Joe’s rendition of some old and familiar poems as well as one of his own compositions ‘Lament for Robbie McMahon’. Born and reared in Miltown Malbay, it’s no surprise that Joe has a great affinity with the sea, and this is evident in his own choice of recitations and in the songs and music he selected for the CD. Joe has dedicated the album to the memory of Irish Coast Guard volunteer, Caitriona Lucas, a highly experienced member of the Doolin Coast Guard, who was assisting the Kilkee unit in the search for a missing man when her boat capsized on September 12th, 2016. She was the first Irish Coast Guard volunteer to die in service.